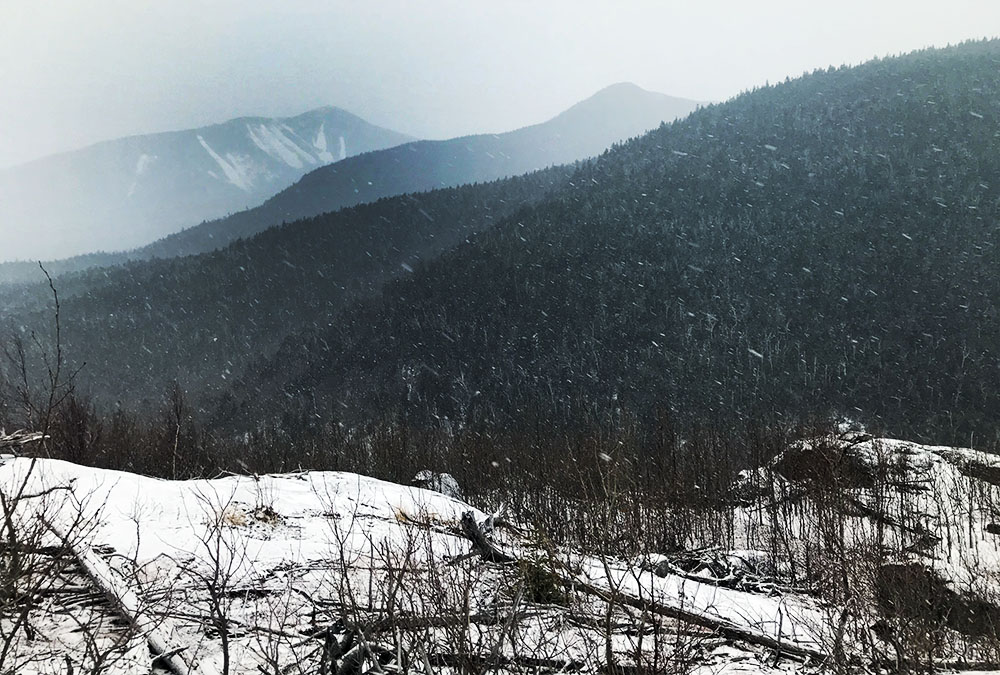 The journey to Dial and Nippletop began with a 5:30 am drive through a snowy and blustery Cascade Pass, descending down towards Keene and Keene Valley.  The plan was to arrive at the Noonmark Diner for their 6 am opening (per Google) and then scarf down some eggs before hitting the trail. To my dismay, the diner was completely darkened when I arrived. I stood there a few minutes, slightly panicked that my breakfast would be reduced to a few sad, frozen Clif bars. I decided to drive back up the road, north towards Keene.

There was a Stewart’s Shop up the road in Keene.  I figured gas station food was better than Clif bars.  As luck would have it, Stewart’s had some excellent breakfast sandwich options spinning around in a warming box.  I grabbed an English muffin with egg whites and turkey sausage, a small OJ, and a cold tuna sandwich for a moist lunch.  My Clif-bar-to-real-food ratio had suddenly improved dramatically.

I parked in St Hubert’s and hit the trail around 6:40 am—a somewhat late winter start. But on one of the shortest days of the year, the woods were still quite dark. I saw just one other car in the lot on this cold, snowy Tuesday in mid-December.  Talk about the off-season!

Walking through the Ausable Club, I switched off my headlamp to enjoy my dimly lit surroundings. Soft, incandescent light from the elegant clubhouse spilled onto the grounds. Behind me, Giant Mountain loomed large over the rolling hills of the golf course, its massive slides blanketed in fresh white snow. And a light flurry gave everything the holiday feels.

I reached Lake Road and signed in at the trail register at 7:05 am. Whereas Lake Placid was covered in snow this morning, the lower-elevation Ausable club was mostly bare, frozen ground. Thick ice from recent heavy rain coated the roadway itself, and microspikes proved invaluable in making safe, speedy work of it.

The day began to slowly brighten as I reached the H. G. Leach Trail that leads over Bear Den and Dial Mountains en route to Nippletop. The trail ascended at a steady clip through an open forest of large, mature conifers and hardwoods.  The route was in great, erosion-free shape and kept mostly to a small ridgeline, away from streams and marshy areas.

I began to work up a sweat, so I pulled off my tech hoodie and ski gloves to ascend in nothing more than a light-weight long underwear top. I took big gulps of ice-cold water from my Nalgene and felt thankful this hike wasn’t happening on a hot, buggy day in June. Through the trees and the snowy mist, the Wolf Jaws grew prominent across the valley.

As I gained altitude the snow and ice grew more complete in its coverage.  Soon rock-solid mini-waterfalls appeared across the trail, similar to the day prior on Tabletop, but larger and more frequent.  Recent rainfall had soaked into several inches of snow that was now frozen solid and bulletproof. And an inch fresh snow made matters that much more treacherous.

Against all this, my microspikes failed to gain any sort of “bight”. I had to ignore my nervous instinct to tiptoe up these scary sections on the balls of my feet. Instead, deliberate, flat, stomping steps proved much more useful. I shoved my trekking pole into the ice with every step—my lone source of reliable traction.

After 20 minutes of this slow, precarious dance, I decided to switch into my fancy new crampons.  Immediately thereafter I heard the satisfying crunching sound of sharp steel tines sinking deep into the cold, hard snow and ice.  I could now walk uphill calmly and casually, stepping on snow-dusted solid ice with impunity. My trekking pole was once more demoted to humble walking stick.

The trail passed through some young sapling stands, where it was easy to see out north towards the Au Sable River and the Great Range. On a clear day, I’m sure it would look marvelous. But on this cloudy morning with light snow, I could only catch brief glimpses of Gothics, Armstrong and the Wolf Jaws.

I wasn’t complaining though: the beautiful, snowy forest was still and silent.  I felt invigorated, only just starting to come down off the sugar high from my breakfast OJ, and I started to wonder if Colvin and Blake might make it onto the day’s increasingly ambitious itinerary.

And then I checked my phone and realized I was at a mere 2300’ above sea level.  Having hiked from the Loj the day before, I was spoiled with a 2200’ starting elevation.  But today, 1000 feet up, I had only broken even with that level.  Worse, the trail was steeper and more rugged than the supremely fast and evenly-graded Van Hoevenberg trail.  This was the more typical Adirondack hike.

I trudged on, eventually entering state land, and gaining the ridgeline.  Up here the snow was deeper, more fresh and lush. My crampons grew silent as they sank into a few inches of non-solid snow.  Conifers began to dominate the landscape, and the forest just looked so gosh darn gorgeous.  The flurry had turned to a steady snowfall.

The trail dropped over a bare ridge and down some rocky ledges.  I’m told a forest fire created this vista. On a clear day, the views must be stunning. On this snowy day, the misty, limited views lent the whole ridgeline trek a very isolated feel.  Unable to place myself in the broader context of the high peaks I’ve grown so familiar with, I was tricked into feeling like I was in a place far less familiar and that much more remote.

I reached a swampy (but now frozen-over) col, and began a slow, sweaty, several-hundred foot push up to the peak. Finally, I reached my first summit: Bear Den Mountain.

Bear Den was given the decency of a pair of mileage signs, summarizing the progress made so far from St Huberts.  The signs failed to mention you were standing on Bear Den, but this was still better treatment than a lot of non-high peaks get. Likewise, the signs revealed the—still quite large—mileage left to Dial and Nippletop, and made no mention of Blake and Colvin.  At this point, I sort of knew the latter two peaks were off the agenda that day.

The descent into the next col was fortunately brief, perhaps 250 feet, and soon I was ascending on towards Dial.

The hike grew strenuous, and I once more shed outer layers in favor of just a thin base and bare hands.  I was now flirting with the 3300’ mark—2000’ above the trailhead—and a little bummed there was still another thousand to go.

I came upon some weird, large tracks that were disconcertingly far apart in the snow.  What kind of creature leaves a mark like this? The tracks featured two long toe-like impressions and a hind hoof-like round one. My first thought was “moose!?”  Moose were exceptionally rare in the Adirondacks, and I wasn’t sure they spent much time up on ridgelines rather than down in marshy, boggy moose habitat.  I tried to calm myself by thinking “it’s probably just a deer.  A really, really big deer.” That didn’t help much.

Fortunately, the woods managed to distract me.  The trail climbed in a gentle, rolling fashion now and featured minimal erosion. The forest was open and the southern exposure allowed birches to thrive amongst the conifers even near the 4000′ mark. I definitely recommend the H.G. Leach trail to Dial and Nippletop if you’re looking for a decent-mileage High Peaks hike with minimal crowds and solid views.

Soon I had reached Dial. The summit featured an oddly convenient, massive boulder from which you can rise above the trees and survey… well, in my case mostly mist.

Onward to the most amusingly/awkwardly-named peak in the ‘dacks: Nippletop.  Okay, Poke-o-Moonshine is probably up there too. But Nippletop also has innuendo going for it.

Shortly after climbing out of the col between Dial and Nippletop, I ran into the only other human I’d see that day: a young man with a full pack and an enormous camera. We chatted briefly about the trail conditions. I told him it was very icy to the East and flashed my crampons.  He told me it was quite snowy to the West, and brandished his snowshoes. On balance, either gear choice worked decently well that day.

The non-frozen snow never reached consistently above 8 inches in depth, though the wind created some impressively deep drifts here and there.  I post-holed on perhaps three occasions, but each time I stopped to fill the deep hole in with snow, packing it down and muttering a mea culpa to the trail gods.

Soon I neared the summit, and passed through some truly ferocious blowdown.  I stopped to marvel at how powerful the wind could be up here.

A moment later I reached the short sput to Nippletop, complete with adorable DEC signage. Halfway along the quarter-mile spur, I caught a glimpse of Nippletop’s cuspy summit.  It was 1 pm, a full six hours from the trailhead at the Ausable Club.

At the summit, I threw on a puffy down coat along with gloves and a tech hoodie. I took a big gulp of cold water, drank some hot drink mix from my thermos, and finally, sat down to enjoy the tuna sandwich from Stewart’s. Perfect.

Feeling warm refueled, I stuffed my down jacket back into the pack and set off down the mountain.  First back across the spur to the main trail, and then down westward, towards Elk Pass.

The Elk Pass trail was a lot steeper than the H.G. Leach approach.  That said, crampons and a trekking pole made for a fast descent.  Even in a rainy December, the rocks and roots were smoothed over by snow and ice. I made several glissades (a fancy mountaineering term for butt sliding) down the steepest sections. On each occasion I landed in a nice, billowy pile of powder—winter hiking at its best!

It took roughly an hour to reach Elk Pass (2:30 pm).  Whatever foolish glint of hope I had for summiting Blake and Colvin fully extinguished as the nearly-solstice afternoon began to darken.  I reached a sign for a pit privy, and my lower digestive tract perked up in excitement. Sadly, I failed to locate this magical privy amidst the snowdrifts and blowdown.  And so I pressed on.

The pass featured three small, frozen, lakes.  Framed by the sloping ridgelines of Nippletop and Colvin, and surrounded by a foggy void, the snowy pass felt so remote and desolate.  I quickly decided this was the absolute best introduction to Elk Pass—surely one of the coolest remote campsites in the park.

Back to St Huberts

From there, I descended steep trail once more, passing the junction for Colvin before reaching the Gill Brook Trail.  The woods grew darker, and the forest canopy taller as hardwoods came back into vogue. A large, icy stream—presumably Gill Brook—ran beside the trail.  I stopped a few times to marvel at the massive lesions of ice that had grown over the various falls.

The trail had several “scenic” bypasses that plunged down towards the riverbed.  Tired and in no mood for shenanigans, I didn’t take the bait.

By the time I reached Lake Road, still a few miles from the Au Sable Club, it was dusk, e.g. 4pm.  What a short (and yet long) day! I switched from crampons to microspikes, added some warm layers, and switched from soggy ski gloves to warm mittens. It was getting cold!

By the time I reached the trailhead, it was truly dark.  I signed out at the register and then continued past the empty clubhouse. Finally, I reached the car, with my first dawn-to-dusk (and then some) almost-winter high peaks adventure in the books.