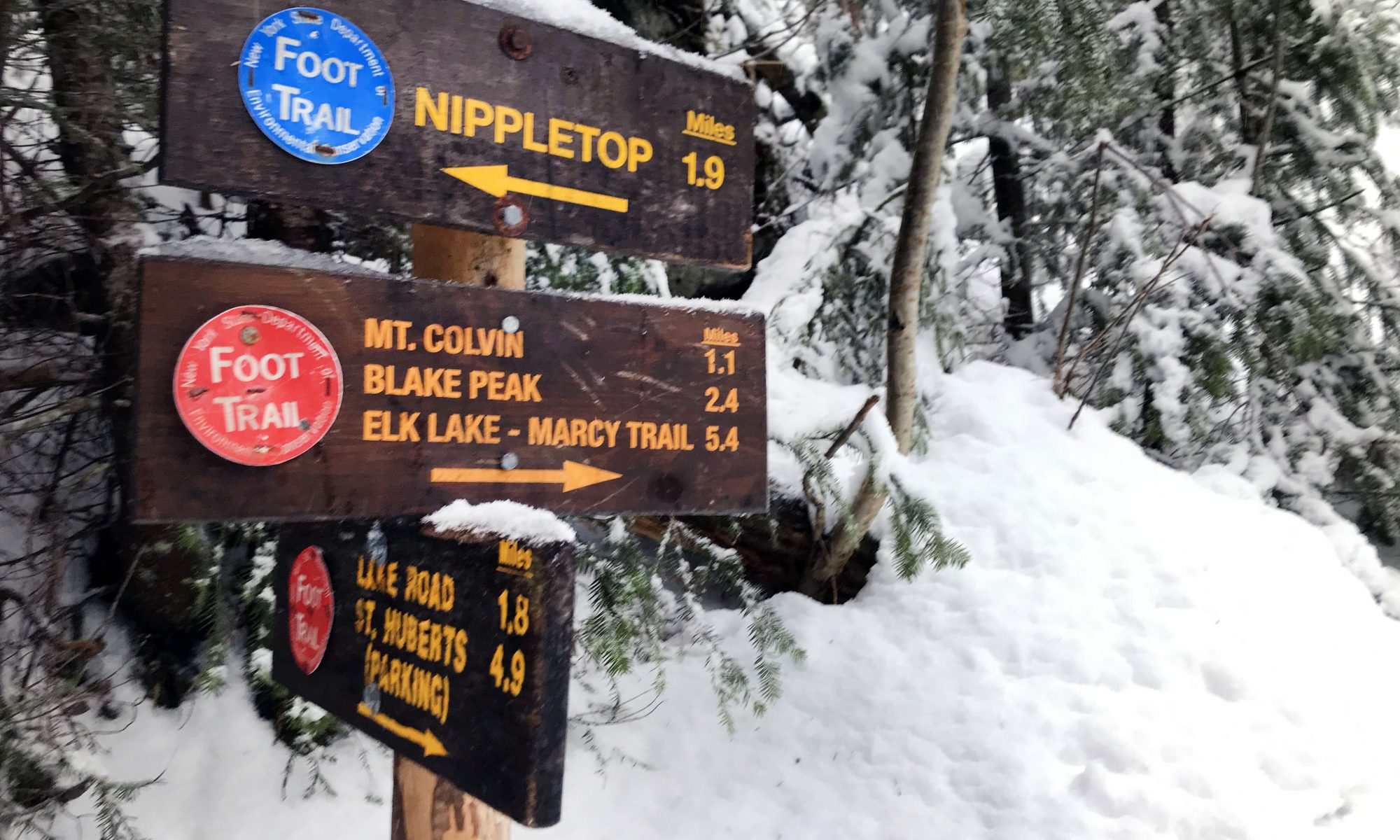 On the Road Again

Just weeks after summiting Dial and Nippletop I returned to the Adirondacks to finish off the Colvin Range with Colvin and Blake. I left the car park at 6:45 am, a bit later than I’d hoped for. But soon enough I had signed in at the AMR trail register and was off down a snowy Lake Road.

Originally, the thought of splitting the Colvin Range in half—effectively tripling the time spent on Lake Road—really bummed me out. But having completed all AMR-adjacent High Peaks, I harbor no ill will towards this thoroughfare. Lake Road runs three miles end-to-end and you can easily ascend it in under an hour. It brings you 1000 vertical feet above the trailhead in the process, making it an incredibly efficient way to tackle various high peaks. And the scenery is a big improvement over my usual subterranean commute beneath the East River.

And so, less than an hour into my day, I reached the Gill Brook Cutoff trail and began the ascent towards Colvin. Light snowfall grew in strength as I gained altitude. Soon my feet began to sink into a mixture of fresh powder and the more crunchy, stale snow underneath. And so, three miles and 1500′ into the hike, I finally caved in and put on my new snowshoes.

Prior to this moment, on a steep, rocky patch trail halfway to Colvin, I had never worn snowshoes. I assumed, quite reasonably, that strapping giant paddles to my feet would make for miserably slow and laborious trekking.

I can happily report that nothing could be further from the truth! The lightweight decking connected to the ball of my foot via a crampon-laden hinge. My foot could do as it pleased, unburdened from lifting the bulk of the device off the ground. The hinge crampon proved far more capable than microspikes in gaining a decent bight on snow and ice. And the lightweight decking, lined with smaller crampons itself, prevented backsliding into the snow—sort of the whole point of the device.

Immediately, I regretted the prior three miles spent without snowshoes on my feet. I was a happy convert to the church of snowshoes.

Soon the Gill Brook Cutoff trail merged with the Gill Brook Trail and I was back on familiar ground. The route left AMR property and passed by some designated campsites. Surprisingly enough, a couple of serious winter tents were pitched alongside the trail here. Not a bad way to spend a snowy January weekend.

The snow grew deeper as the woods transitioned to predominantly conifers. Thick blankets of the white stuff covered everything branch and log and bough. And ice. Ice coated pretty much everything not buried in snow.

I began to work up quite a sweat ascending the 2000+ vertical from the Lake Road to Colvin. Wet heavy snow likewise began to soak into my exposed base layer top. The day was warmer than my prior winter excursions.

Soon enough I had summited Colvin. I powered up my new Garmin Inreach to send a summit ping to some friends and family. The pricey device seemed worth the trouble considering how many remote 46ers I planned to summit solo this winter. Checking the altitude reading on this GPS device likewise seemed a fitting exercise atop Colvin of all places. Verplanck Colvin was a surveyor whose pins adorn many of the Adirondack High Peaks.

I liked the Sewards. I didn’t mind Street and Nye. And to date I had yet to summit the Santanoni’s, Allen or Cliff/Redfield. So perhaps this opinion will change in due course. But for now, Blake is officially the worst.

To be clear, nothing terrible transpired on my trip between Colvin and Blake. Increasingly heavy snow festooned the air as I journeyed through the lush, misty, Adirondack boreal forest. But boy was there a lot of up and down to get to a peak essentially devoid of views or any real, unique character.

You descend a steep 700 vertical feet to the col between Colvin and Blake. To be clear, this places you in a very remote local depression with no exit to any trailheads. And then it’s another 500′ of climbing to Blake’s summit. This is the same vertical shenanigans as the route between Giant and Rocky Peak Ridge. But unlike RPR’s gorgeous 360 views across New York and Vermont, Blake gives you nothing. You don’t even get a wooden summit sign. Literally nothing.

To top it all off? Blake falls short of 4000 feet, making it an expensive, remote, viewless, signless poser of a high peak.

Whatever. I’m over it.

Back over and out

It was already mid-afternoon by the time I reached Colvin again. The descent proved fast and uneventful. Soon enough I was back on Lake Road, now covered in more fresh snow. The forest grew dark and I started to feel quite cold. The warm weather, wet snow and rugged terrain meant a lot of water and sweat had accumulated on my base layers, gloves, hat, and tech hoodie. All were wool or synthetic, none had lost insulating properties, but nonetheless the moisture was not helping matters. Ironically, warm winter days can be among the coldest!

Luckily, I had dry mittens and a down jacket in my pack. I switched into these bad boys and soon enough I felt toasty warm again for the walk out long Lake Road. Colvin and Blake were in the books: another successful high peaks adventure.