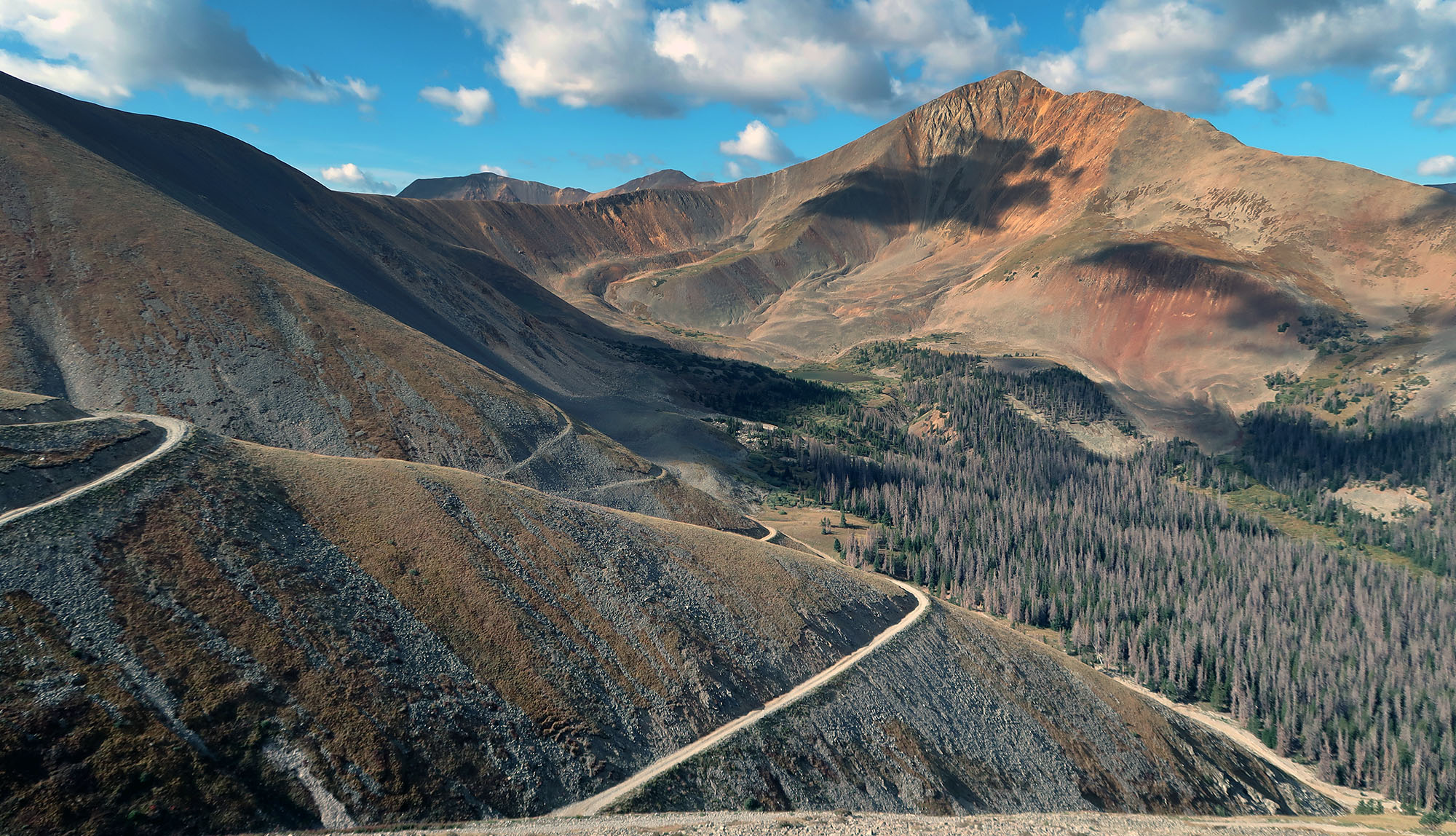 By early September my 2021 Colorado fourteener season was drawing to a close. That said, I needed a low-drama, high-vertical summit to keep me in shape for an upcoming technical ascent. Luckily the Sawatch Range contains peaks like this in abundance. After scouting some maps and websites I settled in on Mount Antero.

Let’s get this out of the way: Mount Antero will not become your favorite 14er. It’s a dramatic, gorgeous summit that lords over the Southern Sawatch. You’ll find ample camping opportunities near its trailhead. And you can even relax in some excellent hot springs post-hike.

But Antero suffers one fatal flaw. It’s a 5,200-vertical foot, 15-mile journey almost entirely along a jeep road. That means you’re sharing your hike with ATVs and high-suspension cars. Only the final 500-vertical ascent to the true summit exists ‘car free’.

This does not make Mount Antero a terrible trek. Craggy summits and deep valleys assault your eyeballs all day long. Every inch of this hike is beautiful. But you won’t enjoy a level of backcountry purity typically found on peaks like La Plata or Elbert. So going in, I had somewhat low expectations.

Mount Antero takes its name from a prominent Uintah Chief. This makes Antero somewhat unique, as one of the few summits named after an individual but not a white man.

Only one other 14er summit takes its name from a Native individual. That summit, Mount Shavano, lies just south of Antero.

Mountains have many uses

I found myself with many hours to kill along this hike. That got me thinking about land use in the Rocky Mountains. Unlike many leave-no-trace evangelicals, I do not believe every inch of mountainous landscape should be zoned wilderness.

Some folks love hiking and backpacking. They want to spend weeks deep within the High Sierras, inching towards some isolated summit. They want to lose themselves, like John Muir, in a state of underfed/over-natured nirvana.

And that’s just fine for them. I too enjoy a good wilderness backpacking trip. But during my short tenure in California, I found the Sierras a bit too inaccessible. There were too few approach roads, fed by underbuilt highways through high-traffic towns. There were too few lodging options, with sky-high nightly rates. Too many summits I wanted to hike involved long approaches I didn’t have the vacation time for.

Colorado handles its mountains a bit differently. Granted Colorado overflows with mountains. Some peaks sit inside vast wilderness areas. They forbid motorized vehicles or permanent structures. Some sit within national parks with improved access but tightly controlled uses. Others sit on national forest land, where they enjoy a broader mix of uses and improvements. Some peaks allow ATVs and jeeping. Others have private owners and see heavy mining activity. Mountains are for hiking and camping. But they’re also for skiing and snowmobiling and ATVing and forestry and mining and cosmic ray observatories and cog railways and joy rides. The more uses we allow, the broader the socioeconomic groups who get to enjoy them.

So by the end of the road ascent, I had made peace with the internal combustion interlopers. I had (sometimes) 58 fourteener summits to enjoy unimpeded. They only had a handful. We were all good.

Around 13,700′ I left the road behind. For the final 500 vertical foot ascent, the trail becomes a standard “single track” hike. I saw big, dramatic clouds moving rapidly into the summit region. These clouds seemed light and puffy. I’m no meteorologist. But I felt confident I could ascend without fear of getting zapped.

This final ascent proves short and sweet. But bear in mind you’ll engage in some minor route finding along the craggy ridge. And the steep falloff on either side can induce some mild vertigo for folks without many high-class 2 summits under their belt.

But overall, this is a fine, low-risk journey on a day with good weather. As I neared the true summit, I found ample sunlight between the giant puffy clouds. Mount Antero lords 7200′ over the valley between Buena Vista and Salida. You can see Pikes Peak (East), the Collegiates (North), the San Juans (West), and the Sangre de Cristo (South).

Atop the peak, I ran into a couple who had ascended a non-standard route from the East. We chatted for a bit before beginning our opposite-side descents. I always leave these peaks wanting to return for the more adventurous routes.

The Long and Winding Road

Back on the road, I “settled in” for ~7 miles of slow, open descent. Songs were sung. Sunscreen was applied. Jeeps were passed.

Eventually, I made it back below the treeline. The sky was kind enough to avoid precipitating all day long. From the forecast, I knew this was always a bit of a gamble. As I passed through a grove of aspens within a couple of miles of the trailhead, I saw some yellow leaves. Fall foliage would soon arrive in the Sawatch.