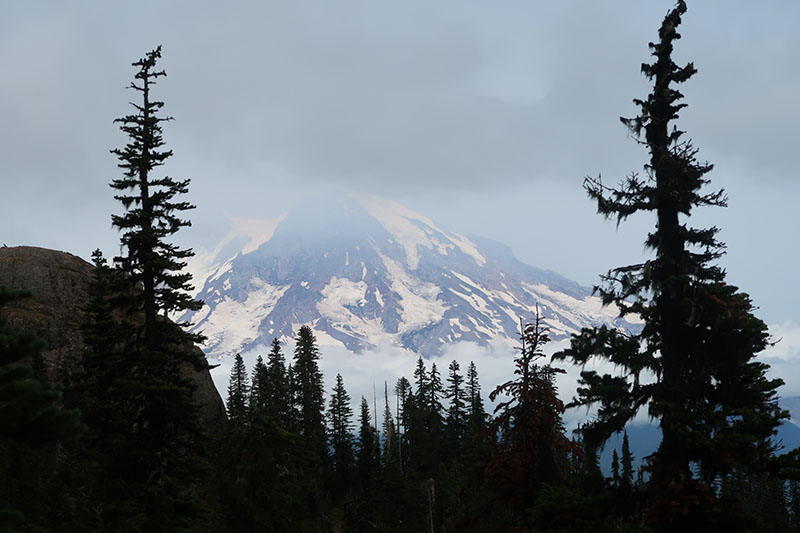 In the summer of 2018, I ventured to the Pacific Northwest to take part in a guided climb of Mt Rainier. The day before the program began, another participant and I decided to stretch our legs, post-travel, with a quick day hike. The folks at the motel we were staying at had an unsurprisingly excellent knowledge of the region and its hikes. They warned us to avoid Rainier National Park, down the road.  They predicted an hour-plus line on this sunny Saturday afternoon in August—just to get through the gates!  Instead, they wrote down a list of turns to take via dirt logging roads to a nearby hike outside the park.  The hike was known as High Rock.  For anyone without the inside scoop, Google Maps can get you there just fine.

We set off East on WA 706 from Ashford and soon made a right turn onto a minor road just before the big line of cars to the park entrance. After a pair of bad turns and readjustments, we wound our way up a couple of thousand feet to the trailhead.

High Rock’s trailhead sits right on a ridgeline at 4400’.  Despite the byzantine logging roads and remote location, the car park was busy on this sunny, summer Saturday.  That said, ample parking remained and even from the trailhead the views of the Cascade mountains were gorgeous.

The trail ascends 1300 vertical feet in roughly 1.5 miles, climbing slowly at first but then steepening consistently towards the final push. It began under the canopy of towering conifers in an open forest, fulfilling every stereotype you have in your mind of the Pacific Northwest. It was well-drained and devoid of major muddy patches or erosion.

Early in the journey, Mt Rainier to the north establishes its unavoidable presence. The tallest and most prominent peak in the lower 48 (though not the highest), it loomed over the landscape.  Its glaciers and bare rock ridges struck me as a stark contrast to the lush greenery elsewhere nearby.

The hike began in pure sunshine, but clouds soon blanketed the summit. The farther views shifted in and out of seeing distance. As we emerged onto the bare rock at the top of the ridgeline, an old fire watch came into view.

During this final push, Rainier was unfortunately obscured by clouds.   But the summit was still a breathtaking experience, with some vertigo-inducing sheer cliffs.

We reached the fire watch, went inside and signed our names.  Perhaps a dozen other hikers were relaxing at the summit.  After perhaps 20 minutes, we descended back towards the trailhead.

This was an excellent day hike!  I would recommend this to anyone who wants to soak in the experience of Mt Rainier without the insane crowds and park entrance fee involved in one of America’s most accessible national parks. At just over 1,300 feet and three miles round trip, it’s also a manageable couple-hour hike with a big payoff on a clear day. Good stuff.